How to set Light sensor levels for CyanogenMod 6

When the brightness of the screen is set to the automatic at CyanogenMod 6, I feel a little bit dark. If you want more bright, it can be set from CyanogenMod settings → User Interface → Automatic backlight.

In the "Edit other levels..." setting screen, current sensor value, brightness of the screen (0-255), and the backlight levels of the button (0-255) are displayed in the upper part of the screen. The sensor value is a value of lux. It's an about 600 lux in a office, 1000 lux near a window, and over 10000 lux at outside on a sunny day. I will explain filtered/raw of the sensor value later. 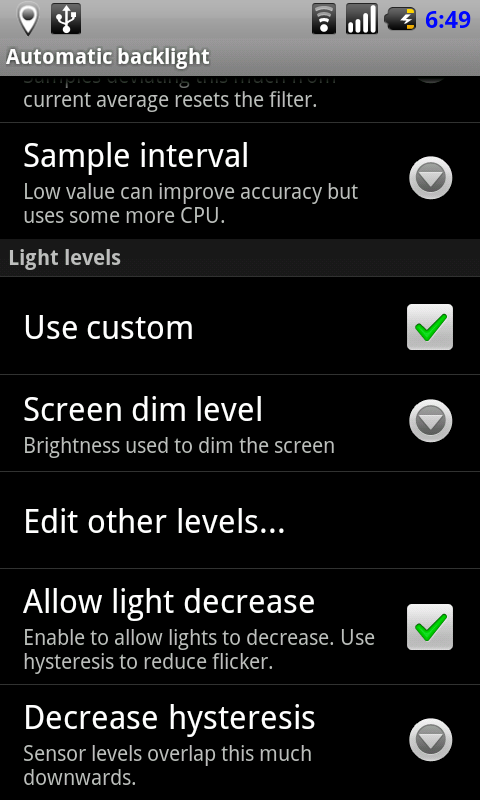 Therefore, the brightness level changes from 255 to 100 at 80% of "Decrease hysteresis" (Because the threshold becomes 1400 lux) while it is still 255 at 90% of "Decreased hysteresis" by the above-mentioned example.

(5)Finally, check "Enabled" at the Light sensor filter if necessary

This filter also prevent the screen brightness changing suddenly. The sensor value which sampled by "Sample interval" (ex: 1 sec.) in the "Window length" (ex: 30 sec.) is averaged, and it is assumed the filtered sensor value. As a result, the sensor value doesn't change rapidly.

Glad to see a fellow blogger blogging about something we love. Wonderful post. I've been looking at this too.

Regards -When one door shuts, a hundred open. - Spanish Proverb